skip to main | skip to sidebar

Richard F. Yates (aka the Supreme Bunny Warlord) has just published a collection of his poetry called NIGHT NOISES. To acquire a copy of your very own, simply visit Amazon.com and order one!

Thanks!!!
Posted by thedestroyerofworlds at 1:46 PM No comments:

Update from the FRONT!!!

I'm moving my thoughts to a new venue!

Still going to try blogging for awhile, but I've started a new blog that's more in keeping with my current mindframe. Check it here: ELECTRONIC FOG
Posted by thedestroyerofworlds at 1:29 PM No comments: 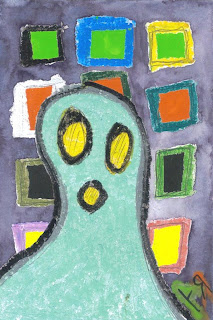 "Little Ghost" 6 in. x 4 in. oil pastel, water color, and pencil on paper (postcard).
One of my postcards. I ended up taping this to the cover of one of my writing journals.
Posted by thedestroyerofworlds at 10:22 PM No comments:

I have just re-read my previous posts and found them, almost entirely, unacceptable. Spelling errors and typos abound. The tone is overly precious and under-whelming. But, if I edit, or even remove them entirely, I will be no better than the monsters in the Ministry of Truth, altering the past to make it conform with our current ideas. I want to be an entirely DIFFERENT kind of monster.

So, what have I been up to? For one thing, I've just today posted a Halloween-esque radio program (in three parts) at the Etherwave Radio Show podcast page which should thrill and chill you (if you're into that sort of thing.) And I spent a large chunk of this weekend going through my poems for a collection I'm putting together called Night Noises. Hopefully, I'll get that finished sometime soon. And I also just completed tests of some equipment (an old USB microphone that the kids got with one of their karaoke video games) to see if it would work to record some poetry readings for a new podcast of all spoken word and sound poetry that I'm guessing I need to put together (before the idea of it drives me completely bonkers.) I've been listening to Ubu Web and PennSound podcasts for the last few years, and it all seems so easy... I've just got to play along, too!!!

That's what I've been up to, for better or worse.
Posted by thedestroyerofworlds at 2:12 PM No comments:

It's been a long time since I posted anything here. Six months or so. But, I haven't been inactive in that time, I've just been other-focused. I'm a bizzy fella by nature.

Since my last post, I've resumed my passion for art in a big way. In the past I've done a number of things with zines and collages, and for a number of years I was quite active in the postal art scene. (You might remember the M.A.R.S. Project, which ended up including over a hundred different contributors' works and had three out-door showings. Fun stuff.)

But, lately, my main interests have been poetry and these oil pastel-watercolor things I've been doing. (I don't know whether to call them drawings or paintings, because I do both in most of them. I've posted a few poorly taken photographs (I'm not very good at taking photos) on my MySpace page that you can look at if you want. (I also keep a record of my recent publications there, so if you want to read some of my published poetry, there'd be the place to go to see who is silly enough to give my stuff room.) But, as soon as I get some paper towels, I'm going to start scanning the pictures (some of them, anyway) and posting them here.

So, this is just a heads-up. I'm coming back this way. (Seems to be the way the world's leaning, and just like riding a motorbike, if you don't lean with, you fall off!) I'll be back super soon.
Posted by thedestroyerofworlds at 9:42 AM No comments:

Gone in a Flash 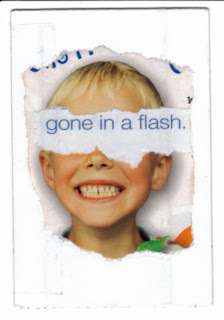 Over the last couple of years, along with my other poetry and short fiction, I have also been experimenting with a sort of visual poetry. I use images taken primarily from magazine and newspaper advertisements and make very small collages, usually on little 3 x 5 cards, that (hopefully) examine the way marketing uses visuals and words to push and pull at our emotions more often than they appeal to our intellect. With collages like this one I hope to, in some small way, expose and even subvert the power of the advertising image while creating something nifty I can mail to someone I've never actually met in person. (I'm a firm believer in the "postal-art" movement as popularized by weirdos like Ray Johnson.)

You can tell me if you think it's successful or not.
Posted by thedestroyerofworlds at 11:04 AM No comments: